With a fresh school year kicking off across the country this week for close to 2 million students in Canada, the promise of Frosh Week lingers in the air.

The annual tradition that celebrates the first week of university life for freshmen, and the return to school for older students, is often one of the best parties of the year at campuses from coast to coast.

Contentious and controversial, Frosh never fails to garner significant media coverage. Despite recent calls for Frosh Week traditions to “grow up” or for schools to crack down, the tradition will surely live on in dorm rooms, student houses, pubs, and clubs.

With that in mind, York Regional Police have come up with a brilliant and creative campaign to warn students about the potential costs they could face if they party too hard.

The police force tweeted out the expense list earlier today, which covers the obvious like streaking, under-age drinking, and open container violations (cleverly referred to as “Popping bottles in the back of your friend’s Corolla), to the not so obvious, like putting cement mix in the laundry machine, illegal gambling, and, I quote, “forcing a pet to smoke marijuana.”

Educating students on the potential repercussions from not “Partying With Caution”, as the release says, is important. But too often it gets bogged down in an authoritative tone that’s easily glossed over.

Instead, the YRP have done an incredible job delivering this message to students in a more accessible voice. They’ve managed to introduce some humour to the situation (“Dropping excessive bass at 4 a.m.” and “Downing Jager-bombs in public”) while still reminding students to remain safe and responsible.

END_OF_DOCUMENT_TOKEN_TO_BE_REPLACED

On Monday, CBC Ottawa broke the news that a 16-year-old from Barrhaven is facing 60 criminal charges related to “swatting,” which apparently involves placing 9-1-1 calls in the hopes of attaining a large emergency response.

The boy is allegedly behind thirty false alarms across the continent, including fake bomb threats at schools in Calgary and Milton. According to the CBC, he also allegedly used Twitter to take requests for future targets.

In both the print story posted to the website, and a broadcast story run on the evening news program, the boy’s suspected Twitter handle was made public. On the broadcast, images of the account’s feed and recent tweets were also displayed. Judy Trinh, the CBC correspondent who reported on the story, also tweeted a link to the story including the handle of the accused. Within a couple of hours of the story breaking, other Twitter users began to reply to past tweets from the boy, many of them discussing hi future in jail. 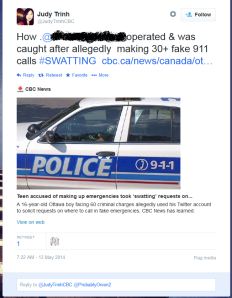 Others who apparently knew – or at least followed – the accused, included his first name in tweet streams linked back to his account.

This is where things start to get dicey.

END_OF_DOCUMENT_TOKEN_TO_BE_REPLACED

Canada may not be the first country that comes to mind when the issue of human trafficking arises. However, a 2010 report by the Royal Canadian Mounted Police revealed that human trafficking is a prolific industry in Canada.

Canada Fights Human Trafficking, a Brantford-based advocacy group, reports that anywhere between 600-1200 people are illegally entered into the sex trade and into Canada annually. A number of Canadians additionally worry that a September court decision in Ontario that proposed to decriminalize key elements of Canada’s prostitution laws could make Canada more of a hot spot for pimps and human traffickers.

That decision, ruled by Ontario Justice Susan Himel who sided with three former sex workers, stated that Canada’s prostitution laws were unconstitutional and should be struck down. Trisha Baptie, a former sex worker who is now an abolitionist and heads Honour Consulting and Exploited Voices Now Educating (EVE) of British Columbia, fears that suggested change to the law would lead Ontario down a dangerous path of human trafficking and coercion.

“I can guarantee you that if these laws were to go through and Ontario had no criminal sanctions, if we envision that, I can tell you every trafficker, every pimp, and every bawdy house owner would pack it in and move to Ontario,” says Baptie.

Phil McColeman, the Member of Parliament for Brant who also sits on the Public Safety commission, also expresses concern that legalizing prostitution offers the potential for human trafficking to grow.

“If you agree to the situation where we have sort of a lawless industry developed, mainly bawdy houses, prostitution and all the things that go along with it, what you do is then you have a potential for the demand to be high and the supply having to meet that demand in which case human trafficking becomes a very, very lucrative business for criminals,” says McColeman.