In the streets of Hyderabad, a city in south India home to some six million people, journalist Manju Latha Kalanidhi pulled out his bucket.

Unlike hordes of Canadians, Americans, Brits, and others who have been filling their buckets with ice and water, Kalanidhi filled his with rice. After loading it up, he didn’t dump it over his head – instead, he donated it to the country’s poor and hungry population.

Dubbed the #RiceBucketChallenge, the spirit of giving is in the early stages of sweeping the nation. So far, the campaign’s Facebook page has received over 54,000 Likes. 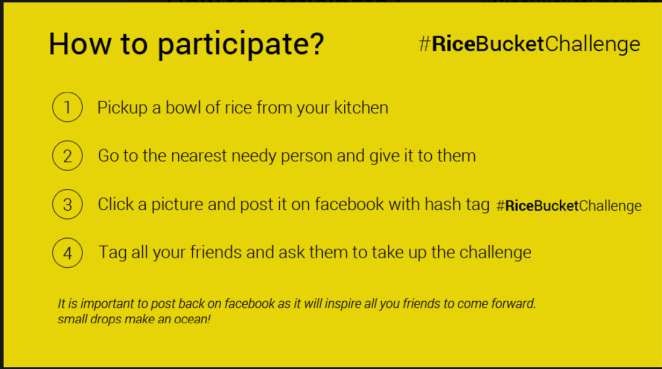 These four steps make up the #RiceBucketChallenge. a campaign starting up in India.

The team behind Thrill, a start-up dating app, took to the streets to participate, and their video gives a good example of what this new campaign is all about:

As reported by Reuters, other companies institutions are also trying to get more people involved. The Indian Institute of Management has already participated, while AirAsia India said that its senior management will complete the challenge next week. As more companies join on board and send out nominations for others to join, the hope is the campaign will continue to snowball.