How Brands Got in on the Beef

Over the past week or so, two hip-hop artists have been involved in a argument that’s dominated social conversations throughout that time. Canadian artist Drake and U.S. up-and-comer Meek Mill have spent the week trading jabs in the media, on social, and have been releasing special songs to undermine the credibility of the other.

Yesterday, Meek Mill released the latest song in the ongoing feud – often called a “beef” in hip hop lingo – and was met with widespread criticism in the hip hop world.

Sensing an opportunity, a number of brands decided to jump in on the conversation and craft their own promotional messages around the beef. For some it paid off well, for others, things were a little forced.

The popular Texas hamburger chain came out firing once the Meek Mill single was released and public opinion determined it was a flop. They were able to capitalize on the “beef” to promote their own product and show off just how “with it” they are as brand, racking up massive engagements.

They followed that up with a second tweet later in the day, realizing they’d struck a great opportunity to attract some earned media (exhibit #1 right here) and remain relevant in searches.

Whataburger weren’t the only fast-food joint ready to jump all over the word play provided by the “beef.” White Castle also came out with their own take on the feud.

White Castle gets in on the social relevancy party

Don’t think discussion of who makes the best beef stops there. Helper, the stovetop easy-dinner in a box, acknowledged the great beef that exists in Toronto in a tweet that came a little late to the party, but still offered some pretty high engagement. Let’s see if sales climb now in Canada.

Helper shows some love to Toronto

Probably the biggest winner of the day, Rosetta Stone did some deep research to come up with their content. Realizing that many critics said that Meek Mill’s latest single was essentially indecipherable, Rosetta Stone saw the opportunity to promote their translation chops while acknowledging that even they face challenges. 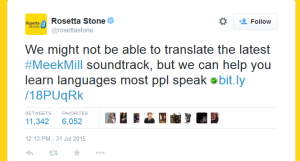 Rosetta Stone with the most brilliant tweet of the day

In Meek Mill’s single yesterday, he referred to an incident where Drake was peed on at a movie theatre. Cineplex, one of Canada’s largest entertainment companies with over 162 theatres, decided they wanted to clarify some things. The tweet was smart, funny, and created good buzz for the company.

Cineplex refers to a line in a Meek Mill single

Not everyone was able to pull it off, with some brands forcing the issue way too much and inserting themselves into a conversation that’s way off-brand for them. An important reminder for events like this, before simply hopping in head first, is to be sure the conversation matches your brand’s overall voice.

These next brands didn’t do that.

Oh, and let the record show that as a proud Canadian born and raised, I’m on Team Drake all day.