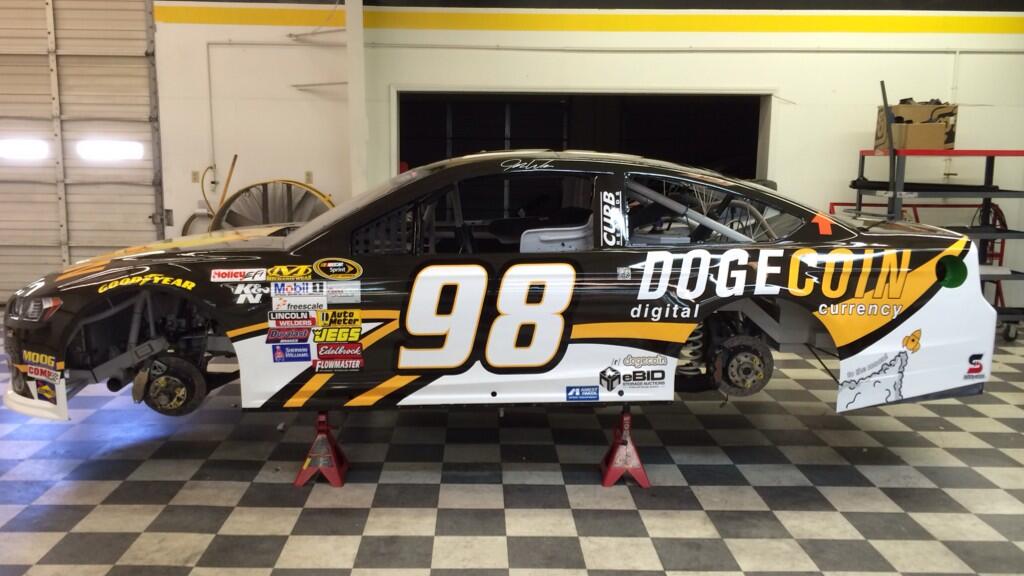 It sounds like a headline from The Onion, but everyone’s favourite Shiba Inu meme-inspired digital currency will get its moment in the Talladega spotlight next weekend.

Dogecoin has sponsored the #98 car for the Aaron’s 499 at the Talladega Super Speedway next weekend.

Talladega, perhaps best known to non-stock car racing fans as the site of Will Ferrell’s 2006 movie Talladega Nights: The Ballad of Ricky Bobby, seats 80,000 NASCAR enthusiasts and is the longest oval on the NASCAR Sprint Cup Series circuit.

Next weekend the Alabama track is home to the Aaron’s 499, the tenth race of the season.

Participating is Josh Wise, a 31-year-old currently in his fourth Sprint Cup season, racing under the Phil Parsons Racing banner. Currently ranked 36th (out of 48), it comes as no surprise that he’ll be participating in the race, one of only four that utilizes restrictor plates and therefore increases parity in the pack.

What may be surprising, and will certainly draw some second glances, is the car that Wise will be racing.

Following a Reddit campaign launched on the /r/dogecoin subreddit that raised $55,000 USD (over 60 million in the digital currency) in less than two weeks, the car’s scheme was released today.

The Shibe, the iconic symbol of Dogecoin and the doge meme.

Meanwhile, Wise’s firesuit also shows the Shiba Inu peeking over the Dogecoin wordmark, the “to the moon!” slogan on the back, and publicizes the Reddit logo, the Dogecoin and Nascar subreddits, and special Twitter hashtag #dogecar. Upvote arrows also dot the sleeves and the suit identifies Wise as being part of “Team Shibe.”

A rendering of Josh Wise’s Dogecoin firesuit for the Aaron’s 499 next weekend.

This will, of course, mark the first time a digital currency is displayed as the major sponsor of a NASCAR car. However, it’s not the first time that a Reddit community has raised money to purchase promotional materials in sports. The college football subreddit (/r/cfb) has donated money to purchase personalized bricks at the College Football Hall of Fame, the Rose Bowl, and Baylor’s McLane Stadium.

A replica of a brick that the college football subreddit purchased at Baylor’s new stadium.

For the car, Moolah (a cryptocurrency payments platform) stepped in and agreed to buy the Dogecoin for liquidized cash, giving the subreddit the ability to make the sponsorship.

While the sponsorship is only for the race at Talladega, Wise and car owner Parsons have both agreed that if Wise is voted in to participate in the All Star Race, he will drive the #98 car in the Dogecoin scheme for free twice later in the season, including at the All Star Race itself.

Read more about the Doge meme or check out this Reddit thread on Dogecoin.