There’s a new way to discover communities on Reddit, as one of Twitter’s most popular and useful tools has migrated to the “front page of the internet.”

Redditors now have the ability to see which subreddits have been trending on the day, in an effort to get users exposed to the site’s smaller communities. According to Tech Crunch, the site will use an algorithm to highlight a handful of non-default subreddits that have been seeing high amounts of activity.

The deafults, that ate excluded, are those that non-registered users see when they visit the site, and include, among others: Gaming, AskReddit, Funny, Pics, Technology, TodayILearned, WorldNews, and Music.

So far, reactions have generally been positive. The highest-voted comment on the “TrendingSubreddits” thread, reads,

Huh this is new, I like this idea. Its a good way to discover new subs.

Others used words like “fantastic addiction,” “one of the best new features in years,” and “great feature.”

As with any change, opinions are not homogeneous. A number of users asked if there were ways to turn the feature off, while others were concerned about NSFW (Not Safe For Work) subreddits showing up on their front page, or including communities that don’t want to be features (Polandball being a prime example).

Meanwhile, for those subreddits that were featured, the mods scrambled to welcome the influx of new readers, as well as re-establish subreddit specific rules. Subscribers to these subreddits also expressed some fear of them dying due to an influx of low-quality content, a fate that has fallen on other subreddits after being made defaults.

It’s not known if this is a pilot project that will be revisited later down the line, or if it’s sticking around for good. Surely, reactions that come over the next few days as more users return to the site and discover the new feature will have some impact on the future of trending subreddits.

For its own part, Twitter has started the roll out of its new interface design, that has by all accounts been described as being very Facebook-like. The new look features a huge cover photo and a larger box for a profile picture. The bio now plays a small role off to the side, while people can pin a tweet to the top of their stream that can act as a second source for information about the user.

Twitter also will begin highlighting tweets that perform well by making them appear bigger in the stream. Tweets can be filtered to show original tweets only, or tweets and replies. Further, the tab that shows photos and videos that have been tweeted will be much more prominent, showing that sharing visual graphics will play an even more important role on the new Twitter.

Wired has argued that the move might be a result of the migration of parents and boomers to Facebook. Twitter’s taking inspiration from the site is lining it up to be more friendly to that demographic and make it more mainstream, as well. As Twitter’s engagement began slowing down, this could help bring that crowd into the fray and bolster that engagement time.

They used the U.S. First Lady as an example of the new look. Find it below. 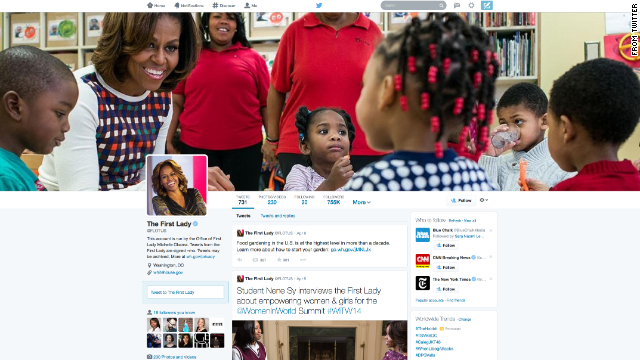