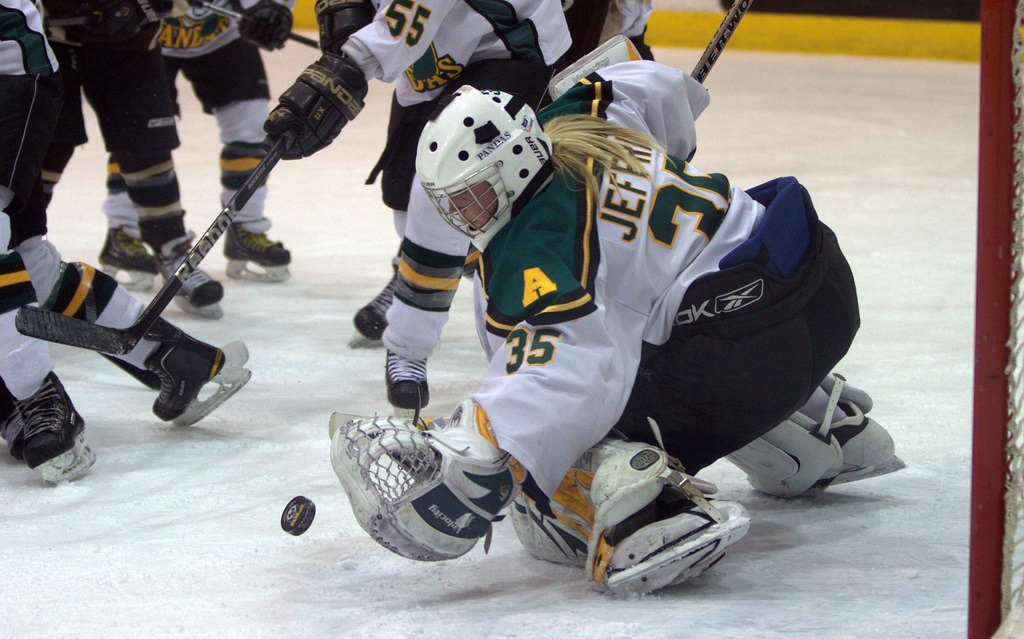 Moving Women’s Sports from the Margins to the Living Room

Close to 13 million Canadians tuned in to watch the women’s hockey gold medal game at last month’s Olympics, with a peak of 6.37 million viewers in the dying minutes when Canada mounted their incredible comeback against the U.S.

During the previous summer games in London, 3.8 million watched the semi-final soccer match between the same two nations.

So please, say again that women’s sports are boring. Or that the players aren’t as athletic or skilled. Or the games aren’t competitive.

The numbers don’t lie. It has been a slow progression, but Canadians are showing that such criticisms are outdated, and more to the point, founded in thin air.

With the Canadian Interuniversity Sport winter championship season in full swing, Rogers has reached out to provide Canada’s top student athletes a national stage. Two weeks ago, the men’s basketball championship was broadcast on Sportsnet, while the semi-finals were on Sportsnet360. This past weekend, the women’s basketball tournament had two semis and one final game on SN360, while the women’s hockey gold medal game was also broadcast on SN360.

Of course, the fact that Rogers’ SportsnetU programming is showing any winter championships is progress in and of itself, as broadcasting anything aside OUA football games of the week and national football playoffs was generally unheard of before this year.

When you add in the lack of media coverage for women’s professional sports (like the CWHL and WNBA), the fact that our female university stars can shine on such a stage is even more important.

Of course, this is by no means an act of charity by Rogers. The success of women’s team sports at the Olympics has demonstrated that there is an audience for our top athletes to compete in front of.

Especially with hockey, CIS schools compete with NCAA (the U.S.’ National Collegiate Athletics Association) schools for the top talent in the world, and act as a pipeline directly to the national teams. This isn’t a lesser league by any stretch, these are the same athletes that draw millions of viewers every four years.

Unfortunately, those stats don’t translate across all sports participation. Despite a shrinking gender gap from the 1990s, Heritage Canada found in 2010 that the gap had begun growing again from 2005, especially among young adults. Over that five-year span, participation among women aged 15-19 dropped 13.2%, and for women aged 20-24 it dropped 14.4%. Among men, participation rates in those age groups grew 2.6% and 4.5%, respectively.

If Canada wants to continue to be a leader in developing women’s sports, we need to find ways to keep women involved. This coverage by Rogers, and broadcasters in general, can hopefully add one factor to help provide that.

Depending on your familiarity and commitment to watching sports highlights, the striking gender gap in sports broadcasting might be common knowledge or wildly surprising.

A 2010 paper out of the University of Southern California does a good job in painting the bleak picture. On a study of the sports segment of three local news affiliates, the researchers found that, in 2009, just 1.6% of coverage was given to women’s sports. Further, they found that coverage for women’s sports peaked in 1999 when they garnered 8.7% of coverage.

The study also showed that ESPN (the sports broadcasting authority in the United States) also had diminishing female coverage, from a dismal 2.2% in 1999 to a more dismal 1.4% ten years later.

The NBA & WNBA represent the greatest example of this gap. In July of 2009, in the middle of the WNBA season, the league earned two minutes and forty seconds of coverage on ESPN’s SportsCenter across five stories. The NBA, which was in the middle of the off-season, had fourteen minutes and forty-four seconds of coverage across 21 stories. Meanwhile, U.S. college basketball in March represents some of the wildest post-season games in sports as both men’s and women’s ball have their massive national championship tournaments. Over that month, women’s college basketball received one minute and twelve seconds of coverage, while the men’s had over an hour and a half.

I could continue to rattle off numbers, but they’d all look the same. Or worse, nonexistent. The Canadian Women’s Hockey League, home to a number of Olympians for the Canada and the US national teams, has almost zero coverage despite arguably being the highest-skilled women’s hockey league in the world. Thankfully, TSN is making strides to amend that, and will air the Clarkson Cup (championship final) on national television.

Sadly, the situation hardly improves outside of the mainstream, either. Even on university campuses, where athletic programs often provide men’s and women’s teams for each sanctioned sport, the women’s games take a back seat.

I had an e-mail exchange with my good friend Shelby Blackley, the sports editor of Wilfrid Laurier University’s student newspaper The Cord, a former national sports bureau chief for Canadian University Press and a John H. MacDonald student journalism award finalist, about the representation of female sports in campus media

“Aside from myself and maybe one other paper, every other [Canadian University Press] paper favoured covering men,” Blackley wrote in an e-mail. I think campus media has created such a stereotype surrounding women sport that it’s not on the same calibre that it’s hard to cover it the same way.”

She also notes that she has the opportunity to cover outstanding women’s teams, punctuated by three Ontario championships for the school. While such success drives interest among local and campus media as well as the student body, it’s difficult for schools not in the same position to grasp.

“The success of Laurier’s women can’t go unnoticed and I think it’s hard for me to justify that to outside papers, but the campus media is where this begins – if the campus wants to know about their women’s teams, then papers, broadcasters, stations and the outside media world will feel more inclined to broadcast and move toward covering both equally. But unfortunately, as much as I would like to say both are equal, they’re not even close.”

Herein lies one of the greatest problems facing the expansion of women’s sport, and especially women’s team sports, as individual sports like tennis and golf do receive much more coverage in their respective niche broadcasting media. The negative rhetoric and attitude surrounding women’s sports has become so ingrained that people don’t want to even give it a chance. They turn the TV off rather than actually investing time to come to their own conclusion.  And while it may seem logical to conclude from this that it’s an entirely male audience driving these decisions, studies have shown that just under half of ESPN’s audience is made up of females.

Fortunately, the numbers regarding viewership of Canada’s national women’s hockey and soccer teams suggest a change might be coming. And while SportsNet 360’s coverage can’t be overstated, and Blackley refers to only as baby steps, it shows that we are moving in the right direction.

It’s not hard to imagine those declining numbers of females involved in sports in Canada having something to do with the fact that the games receive no recognition or respect. As Canada continues to be a vocal leader for the development of female athletes, the CIS offers a perfect platform to show younger girls the heights they could reach. The payoff for the years of hard work and dedication.

Hopefully now they’ll be able to see it.