There’s no denying that Gawker Media has a certain edginess that draws readers in like addicts.

As one of the leading click bait sites, Gawker does a lot of things to give it that reputation: they swear in articles (gasp), they rally against the status quo when others back down, they write lists about everything from Lost characters to pie. They even split fans of America’s pastime and wreaked havoc with the whole Baseball Hall of Fame earlier this year when they bought a vote from ESPN’s Dan LeBatard. They are not strangers to controversy, and people either adore or hate them for it.

Having earned such a strong following (47 million monthly users in the U.S. alone) and extreme levels of engagement, it’s easy to picture some marketing teams spending countless hours stressing over how to tap into that sassy, no bullshit, screw societal norms attitude.

The Atlanta Hawks decided to just eliminate the middle man. 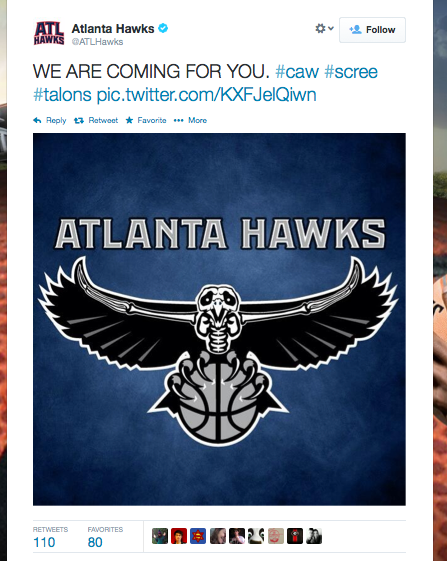 Deadspin’s Drew Magary tries to rebrand the Atlanta Hawks as the “Death Hawks” on their official Twitter account.

Earlier today, the team decided to hand over their Twitter feed to Deadspin (Gawker’s sports site) writer Drew Magary (as well as allowing him to sing both the Canadian and American national anthems before the Hawks game against the Toronto Raptors).

Magary brought his usual balance of wit and astute observational skills to the feed, evidenced by his repeated attempts to make “CAW” the team’s new slogan, as well as his insistence on rebranding the team as the “Death Hawks.”

Those observational skills mentioned above: a screenshot of a burning question being asked by the Atlanta Hawks Twitter, post takeover.

It drew a few laughs (guilty as charged), left others confused as to what was happening (“did someone hack their account?) but overall one of the major takeaways was the question of why?

Certainly, having Deadspin promote and link to your account multiple times in a day is certainly good for drumming up publicity, but a sports franchise isn’t a brand in the sense that Nike or Reebok are. If it had been some sports outfitter or retailer or other media outlet, or anyone who would stand to profit off reaching a large, nationwide audience, this move would be brilliant.

Drawing readers of a pretty thorough sports blog, where one might assume most readers either a) already have an allegiance to a team in that sport, or b) don’t care at all about the sport, leaves me wondering what exactly they hoped to gain.

Sure, they reached an audience. They got to promote their team, but again, how do they profit off of that. They don’t earn money off Twitter page views. Not a single tweet that was part of the #DSTakeover included a link to their site or promoted merchandise (seriously, folks, you should have had Death Hawks shirts ready to roll five seconds after Magary tweeted that out). According to Twitter Counter, at the time of writing the team’s Twitter account only gained 819 followers from yesterday, so they failed to tap into some huge new market that they could spread messages, too.

Granted, the team has demonstrated that they aren’t afraid to promote other brands even in their social media presence. Their Twitter header photo, background, and Facebook cover photo all feature a depiction of the Atlanta skyline, with bold logos for locally-based corporations like Coca-Cola and Chick-Fil-A – a company not adverse to controversy.

Can you spot the logos?

Still, it’s hard to see what benefit the Hawks gained from this. For Deadspin’s part, they got to use a creative hashtag which promoted their own brand, had their Twitter handle mentioned, and at one point, even changed the Hawks profile picture to that of Deadspin.

I’ll be interested to hear the end game of what the Hawks hoped to get out of this experiment, and if they succeeded, but until then my only kudos goes to Deadspin for their double agent super-promotion.

Think you know what the goal was of this joint venture? Share it in the comments below and make me realize it was right under my nose!