The stands were packed, the benches fired up, and the referees’ whistles put away in this past weekend’s big matchup between heated cross-city rivals #9 Carleton and Ottawa. And while the cliché of “the game being closer than the score reveals” is used a lot, it was certainly true in this one. Despite Ottawa outplaying the Ravens for much of the opening period, Carleton were able to escape with a lead after twenty minutes before opening up a 4-0 lead in the second, en route to a monstrous 5-2 victory. 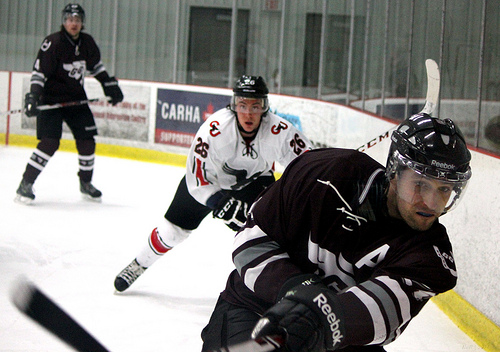 The highly anticipated, crushingly physical game got off to a flying start for the Gee-Gees, who tested Carleton’s backup goaltender Francis Dupuis early and often. Within the first seven minutes of play, the garnet and grey had created a flurry around the Raven net, outshooting the home side 7-0.

All it took was one shot, though, for Carleton to jump out to the game’s first lead. Joey West deflected Matthew Stanisz’ point shot perfectly, tucking the puck just under the crossbar to give the Ravens the opening lead just seven and a half minutes into the game. From there, Carleton settled and slowed the game down to their pace, taking the one-goal lead into the dressing room and outshooting the Gee-Gees 8-4 in the twelve and a half minutes following the goal.

In the second period, it was Carleton who came out on the offensive. Less than two minutes into the frame, Joe Pleckaitis extended the lead, banging home a loose puck sitting at the side of the net in a mad goalmouth scramble.

Ottawa took two subsequent trips to the penalty box shortly after the goal, and Carleton continued to build up momentum. Just twelve seconds following Matt White’s release from the sin bin on Ottawa’s second penalty, Ryan MacLean found the back of the net to open the lead up to three, prompting Réal Paiement to burn his team’s timeout.

The strategy worked immediately, as Ottawa was able to get back on track and slow the Ravens attack. However, with just under five minutes to go in the period, Carleton capitalized on a controversial opportunity and delivered the final blow.

Gee-Gees captain David Foucher was carrying the puck in his own zone, and was hauled down after Pleckaitis got his stick around Foucher’s upper body. The puck made its way to Michael McNamee whose initial shot was stopped, but Damian Cross was able to knock home the rebound to give the Ravens the 4-0 lead.

The Gee-Gees pled their case following the goal to no avail. At the next stoppage in play twenty seconds following the goal, Mathieu Guertin continued to share his perspective on the goal before a faceoff, and was given an unsportsmanlike misconduct penalty, sending Carleton to the power play. Though they were unable to score on the man advantage, momentum was firmly on Carleton’s side, who outshot Ottawa 17-9 in the period, heading into the intermission.

Guertin redeemed himself for the penalty with a goal early in the third following some outstanding play deep in the zone and behind the net by Taylor Collins who fed Guertin all alone in front, but the deficit was too great by that point.

Ottawa tried to crawl back into the game, as Mathieu Oulette broke in on a powerplay and snuck a wrist shot through Dupuis’ blocker side with over seven minutes to play. A physical grudge match instead of a comeback broke out for the remainder, with McNamee adding an empty net goal for good measure with under a minute to go.

Dupuis made 27 saves on 29 shots for the win, while Ottawa’s Warren Shymko allowed four goals on 31 shots in a losing effort.

The win for Carleton came just one night after another huge win over McGill, giving the Ravens 23 points so far on the season. They sit in fourth, two points behind McGill for second place but with a game in hand.

For Ottawa, they rebounded the next day with a 4-2 win in Kingston over RMC, to give them a record of 11-6-1. They sit tied with Carleton in points, but due to tiebreakers (Carleton’s game in hand), fall to the fifth spot. While there’s still a lot of hockey to be played, fans in the capital are sure to be dreaming of a potential first-round matchup between these teams once the playoffs roll around.