Back in October, one of my good friends and I came up with a half- drunk idea that the two of us were going to put together a playlist of 100 songs, 50 a piece, decide in a direction, and just drive. Once that hundredth song ended, we would find a place to stay, park the Jeep, and go get drunk. Then we’d spend the next day just checking out the city or town we were in, and depending on the level of excitement in terms of nightlife, we’d either stay for another night of shenanigans or just call it a night.

Well, last weekend the plan went into action, after a couple of weeks of arguing over songs and which direction we would take.

Coming up with music was both easy and hard. We’re both big fans of classic rock through to more 80’s prog-rock type music up into nostalgic “90s rock” (for lack of a better term). We both hate country, so that was easy. In terms of more modern bands, we ran into some issues. I, being a fan of some hip-hop, was quickly shut down when I tried to throw some J. Cole, Drake & Kanye West into the mix. He, being a fan of stuff like Maroon 5 and Cee-Lo, had some songs of his own shut down. Eventually, we found the newer bands we liked, and we were set to roll. 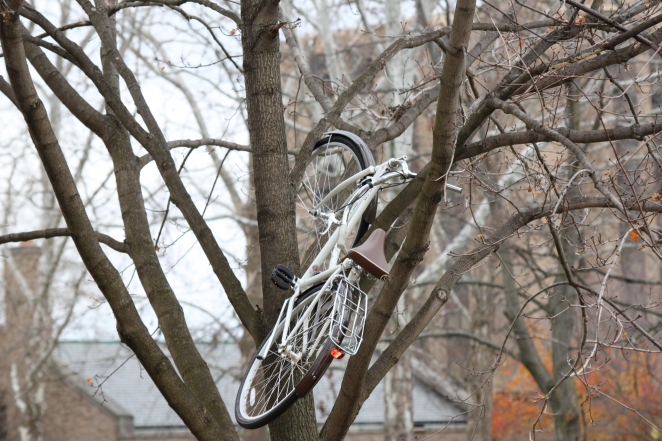 A bicycle sits in a tree at Notre Dame - Kyle W. Brown

But, we still needed a direction. At first we thought about heading east, keeping it in Canada. I realized that we were going to end up way too close to my hometown for it to have any sort of adventure to it, so I put the kibosh on that. He wanted to go through Buffalo, try to make it somewhere on the east coast. I suggested we make course for the midwest, the heartland of America, if you will. So, we consulted, and alas, the midwest won. Off we were, with the goal of making it to Chitown.

The ceiling of the Student Center at Notre Dame - Kyle W. Brown

On the drive we ran into some random fellow outside a gas station peddling contraband cigarettes, got caught in traffic in Detroit and were fearful for our lives (it wasn’t even all that bad), went from one timezone into another, then back into the first one five minutes later, and saw the beautiful town of Paw Paw.

We never quite made it to Chitown…but we were close! (I think?) We ended up pulling into South Bend, Indiana, home of the University of Notre Dame and…uh, Notre Dame football and…Notre Dame students! We were able to find a nice Scottish pub to drink the night away, and then spent the next day just walking around the monstrous (to a guy coming from Laurier, anyway) campus.

In our brilliance, we went on the weekend of American Thanksgiving, and as such, most of the students were actually at home, and therefore the massive frat and sorority parties we geared ourselves up for were simply not happening. So, we called it a good trip and headed home. 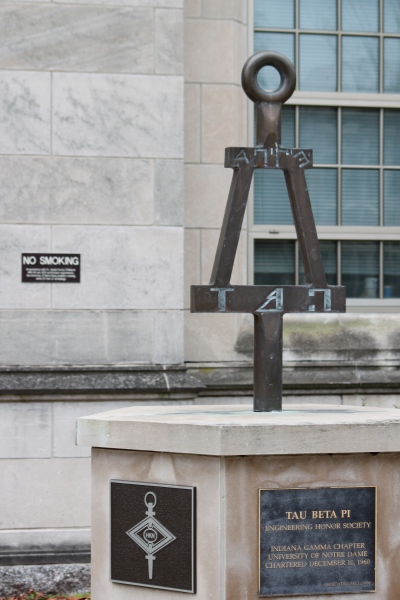 On our way back we did stop at an Applebees in Jackson, Michigan, though, and had a really bitchy waitress and some stomach-upsetting food. So, maybe that was karma that we never should have left and the greatest night ever was waiting for us back in South Bend…probably not, though.

You can find the playlist after the jump.

6. Meatloaf – Paradise By The Dashboard Light

7. DJ Kool – Let Me Clear My Throat (Surprisingly not mine, and I have no idea why this was allowed but Kanye wasn’t.)

8. Lenny Kravitz – Are You Gonna Go My Way

11. Wolfmother – Joker and the Thief

17. Bruce Springsteen – Dancing in the Dark

20. Rascal Flatts – Life Is A Highway

21. Murray Head – One Night in Bangkok

25. Norman Greenbaum – Spirit in the Sky

28. The Killers – All These Things That I’ve Done

34. Bachman Turner Overdrive – You Ain’t Seen Nothing Yet

46. Hall & Oates – You Make My Dreams Come True (Say what you want, I dare you not to sing when this song comes on)

48. Boomtown Rats – I Don’t Like Mondays (I had never heard this song before, and wish I could go back to that…)

52. The Beatles – With A Little Help From My Friends

60. MIKA – We Are Young (Whoops – Tears of Jupiter was supposed to play here, but somehow they got mixed up.)

65. Cage The Elephant – Shake Me Down

74. The Black Keys – Lonely Boy (I may never have rocked out as hard as when this song came on)

82. Creedence Clearwater Revival – Lookin’ Out My Back Door

83. Cee-Lo Green – Fuck You (Needless to say, when this came on, I was not too happy. This broke two rules – that’s one Kanye and a Drake)

85. Creedence Clearwater Revival – Up Around the Bend

95. Neil Diamond – Sweet Caroline (Why I went with a Red Sox fan I have no idea…)

98. Hootie and the Blowfish – Let Her Cry